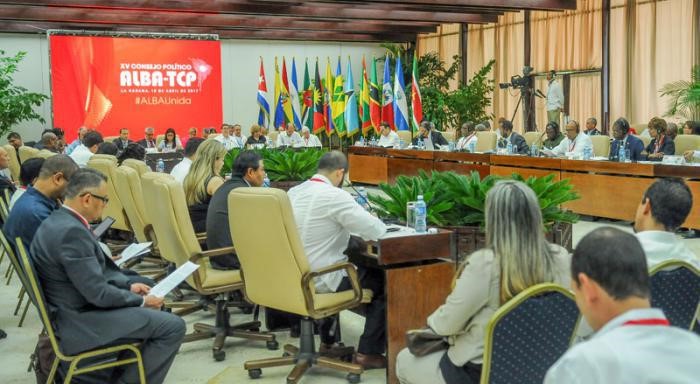 The Bolivarian Alliance of the Americas (ALBA) grouping has come out in support of the Caribbean Community (CARICOM) on a number of matters including graduation, reparations, de-risking, and climate change.

The support came in the form of a Declaration of solidarity with the Caribbean that was issued at the conclusion of the Fifth Meeting of ALBA’s Political Council, held in Havana, Cuba on Monday 10 April. CARICOM Member States which are members of ALBA were represented at the Meeting.

Beckles Calls on Britain to Implement the Lewis Development…

We the Ministers of Foreign Affairs of the member countries of the Bolivarian Alliance of the Americas – People Trade Treaty, at the 15th meeting of its Political Council in Havana:

Recognize the need to face together the challenges in order to achieve sustainable development, including our vulnerabilities as Caribbean countries and in particular as Small Island Developing States and countries in low lying coastal zones, especially in the economic and environmental areas, and to build more just and equitable societies;

Affirm that the Caribbean is an inseparable part of Our America, we highlight the role of CARICOM in the regional integration process;

Reaffirm our solidarity with the Republic of Haiti, for which we feel a historic debt of gratitude, and a commitment to continue fostering cooperation with that nation, in accordance with the priorities defined by its government and in full respect of its sovereignty;

Emphasize, as an act of justice, the importance of reparation and compensation for the damages caused by genocide against the native population and slavery in the Caribbean, and in this regard, support the work of the CARICOM Reparations Commission;

Express deep concern over the inclusion of CARICOM Member States in the list of non-cooperative jurisdictions of the European Union and call for a re-examination of the list based on objective criteria and taking into account commitments of countries in conformity with recognized international standards;

Also express deep concern and rejection to the progressive decline in correspondent banking relations with developing countries, particularly CARICOM Member States, due to de-risking actions by some of the major international banking corporations, which threatens the financial stability of the affected countries and limits their efforts to achieve development and socio-economic growth;

Emphasize the urgent and global priority of climate change and its negative implications for our societies, ecosystems and economies. In this regard, commit to strengthening cooperation foster greater adaptation and mitigation, strengthen resilience and reduce our vulnerability, particularly Small Island Developing States and countries in low lying coastal zones;

Reaffirm the need to continue strengthening cooperation and exchange of experiences and good practices in the area of integrated disaster risk management in the Caribbean;

Reiterate the call to review and modify the countries’ current “graduation” criteria for Official Development Assistance, so as to adequately reflect the reality and specific needs of middle-income countries, particularly Caribbean States, and integrate the different dimensions of sustainable development included in the 2030 Agenda;

Reiterate our commitment to the protection and conservation of the environment and the sustainable use of natural resources in the region, particularly in the Caribbean Sea. In that regard, strongly condemn the continued use of the Caribbean Sea for transit and transshipment of nuclear material and toxic waste, and urge countries that produce and transport them, to urgently implement appropriate measures to end such activities;

Challenges of 2020 Amplify Importance of Regional…

‘We Have Done Fairly Well in Containing…