There will be thanksgiving for the life of former three-time Prime Minister of Barbados, Owen Seymour Arthur, at a State Funeral on Friday, August 14, in Speigtstown, St. Peter, his birthplace and constituency. Although in another life, I recall being in meetings with him, I did not know very much about him. He himself saw this as a shortcoming in the Caribbean Community (CARICOM) as we watch US cable television, another soft form of colonization, and know more about Barack Obama, Donald Trump and Joe Biden than we do about Caribbean Leaders. I did some reading about Owen Arthur to fill in gaps. He clearly had feet of clay and was not without his detractors in the public domain. Where he had “a good name”, as a politician, the consensus is on his commitment to the development of Barbados and Caribbean regional integration, particularly the CARICOM Single Market and Economy (CSME).

To better understand his views on regional integration, I focused on two of his speeches, that he delivered in Jamaica in January 2006 at the launch of the CSME and a lecture he gave in January 2015 at the Institute of International Relations, UWI St. Augustine, Port of Spain, on “Caribbean Regionalism in the Context of Economic Challenges”. This was based on his paper published in the Caribbean Journal of International Relations and Diplomacy in December 2014.

In his 2006 remarks, then Prime Minister Arthur, solemnly pledged his country’s complete support to making the CSME a success fully conscious of the extraordinary obligation being undertaken to make Caribbean unity an effective instrument for achieving progress. He felt that Caribbean unity should be given a chance. He was particularly proud, he noted, to accept the jurisdiction of the Caribbean Court of Justice ending dependence on the British Privy Council. Owen Arthur wanted to loosen remaining ties with British colonialism.

He saw that the immediate challenge confronting Member States, which had widely differing capabilities, was putting in place the mechanisms to 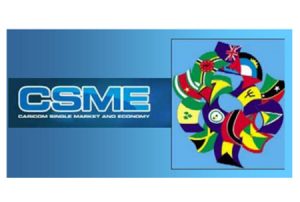 ensure that the CSME would not be a permanent coalition of unequals and the benefits would be shared by all. Between 2006-2008, as Chair of the Prime Ministerial Sub-Committee on CSME, Arthur aimed to place it on a path to success. It is no coincidence that the CSME Unit of the CARICOM Secretariat was located in Barbados.

In 2015, having retired from politics, and now an observer of the lack of progress in implementing the CSME, he was disappointed. Owen Arthur, in his UWI lecture, acknowledged that the CSME was a transformation that would not be easily achieved. It required clarity of purpose and determination to hold a steady course. He saw the current crisis in the regional integration process, reflected in the implementation difficulties, as partly originating in that lack of clarity and determination. He saw the region failing to apply international best practices to improve competitiveness; failing to make progress in the intra-regional free movement of skilled persons; and responding ineffectively to the 2008/2009 global economic crisis. In his assessment, the region of the world needing most to integrate was relying least on this transformation mechanism.

For him, the following were the strategic options which had to be weighed and resolved for Caribbean integration to assist in overcoming the prevailing crises:

Owen Arthur, in conclusion, reiterated that given the region’s geographic and environmental challenges, progress would not come easily, but had to be hard-won. The region would have to tap into its deep reserves of resilience to overcome the many challenges, if it were to avoid becoming an economic backwater.

Of the CARICOM Heads of State and Government, who were in office when the CSME was launched in 2006, only three, Roosevelt Skerrit of Dominica, Keith Mitchell of Grenada and Ralph Gonsalves of St. Vincent and the Grenadines, are currently in office. There is real doubt about the genuine commitment of some of the current Heads to the CSME. The hope is that with the latest health and economic crisis triggered by COVID-19, this cohort of leaders will, indeed, rise to the challenge and not make the efforts of Owen Arthur and past CARICOM leaders be in vain.