OACPS/EU Post Cotonou Agreement – Obstacles in the path to signature

As we enter June, I am noting that the CARICOM Council for Trade and Economic Development (COTED) will be meeting on June 2-3 (now June 1-2) and will be chaired by Jamaica’s Minister of Foreign Affairs and Foreign Trade, Senator, the Hon. Kamina Johnson Smith. I will not, however, be dealing with an issue which is formally on this COTED agenda, as far as I am aware. I am dealing this week with recent reported developments which have serious implications for the signing of the initialed OACPS/EU Post-Cotonou Agreement. This would more appropriately be on the agenda of a meeting of the Council of Ministers of the Caribbean Forum of African, Caribbean and Pacific (ACP) States (CARIFORUM) of which the current Chair is Suriname to the end of June. The Member States of CARICOM are also members of CARIFORUM and should be interested in developments which could obstruct the signing and implementation of the OACPS/EU Post-Cotonou Agreement. In fact, I am thinking that this should at least be under “Any Other Business” on the COTED agenda.

Ending or Evolving: the UK/ACP Relationship

It was reported last week by European and international media that the Government of Hungary, a member of the European Union (EU) since 2004, announced that it would not be ratifying the OACPS/EU Post-Cotonou Agreement. The Foreign Minister of Hungary, Peter Szijjarto, is reported saying that EU negotiators exceeded their negotiating mandate. The Foreign

Minister’s view is that all of his country’s proposals, especially those in the section on migration and mobility, which addresses treatment of legal and illegal migrants, were ignored in the two-year OACPS/EU negotiations. For Hungary, the Agreement is pro-migration and aims at increasing the migration pressure on the EU bloc which has been severely impacted by COVID-19. Further, it is their view that this was not the time to be facilitating more migrants from ACP countries into the EU, and particularly not into Hungary. The Foreign Minister declared that his country would be strongly opposing the OACPS/EU Post-Cotonou Agreement.

Hungary’s position should not have been a surprise as the country has been issuing warnings on EU migration policy since the negotiations started in 2018. In January this year, it was reported that there was continuing discontent among some EU Members such as Hungary and Poland. It seems that immigration policies in not only these countries, but also in countries such as Denmark and the Netherlands, are now less welcoming to migrants from non-EU countries. It is known that for some years now, the EU has had opposition from members to relocating migrants coming from Africa and the Middle East. Annually, there have been desperate people from Africa risking their lives to cross the Sahara and the Mediterranean to get into EU countries. Hungary has opposed having more refugees sent into the country fearing that it would be overwhelmed and its culture diluted by an influx of foreigners with different cultures and religions.

Migration was perhaps the most contentious issue in the OACPS/EU Post-Cotonou negotiations. This migration issue is more specifically one between 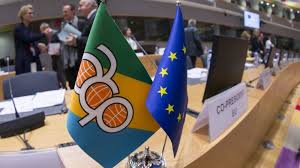 the EU and Africa, although the Caribbean and the Pacific have interest in migration.

Reuters reported that Hungary’s position could derail the Post-Cotonou Agreement. For the EU to sign an international treaty requires approval of Member States at the national levels and of the EU Council and the Parliament. I understand that although Hungary has made public statements, it has not yet formally advised the EU Commission of its position. Assuming formal notification, it is not clear whether the parties will want to reopen these negotiations having initialed the text in April.

In addition to the situation with Hungary, a constitutional crisis has developed in Samoa in the Pacific. It will be recalled that Samoa offered to host the signing ceremony for the Post-Cotonou Agreement which, it was hoped, could be held on location later this year, COVID-19 permitting, and once the approval for signature had been received both in the EU and OACPS.

The constitutional crisis arose following general elections on April 9. The outcome led to the two contending political party leaders claiming victory. Following various challenges and court reviews, it was determined that the leader of the Fa’atuatua I le Atua Samoa au Tasi (FAST) Party, Ms. Flame Naomi Mata’afa, was declared the new Prime Minister. She would become the first female Prime Minister of Samoa. This decision was opposed by the leader of the Human Rights Protection Party (HRPP) and outgoing Prime Minister, Tuilaepa Aiono Sailele Malielegaoi, who had been in office since 1998. He acted to prevent the swearing-in of the Prime Minister designate by locking down the Parliament building. Her swearing-in was held in a tent. Malielegaoi has refused to demit office. The Supreme Court is still grappling with resolving this political impasse.

The UN Secretary General and the Prime Ministers of Australia and New Zealand have called for an early resolution through dialogue and for respect for the rule of law and democratic processes. I have not seen any comment on this Samoan crisis from the EU and OACPS so far. Samoa is also a member of the Commonwealth.

Samoa is currently President of the OACPS Council of Ministers and Chairing the OACPS Committee of Ambassadors in Brussels. Their term is scheduled to end in July.

It is evident that the post-Cotonou Agreement is facing serious challenges and we in the Caribbean should be aware of these developments which could derail the Agreement or further postpone its signature and ratification.  The existing Cotonou Partnership Agreement has been further extended to November 2021.