Caribbean Foods and Trade: Legacies of Colonialism and Slavery: should we ditch them?

The Caribbean, as we know it, results from the expansion of international trade. Christopher Columbus was seeking a new western route to trade with India and China when he encountered these islands opening the door to further exploration and occupation of the Americas. As Caribbean peoples, we are all here because of the transatlantic triangular trade in manufactured goods, enslaved African people, and the European insatiable appetite for sugar, along with other tropical agricultural products, coffee, cocoa, and ginger, among others. Trade patterns and foods we eat came along with this historical experience.

This week, I could be wading into stormy waters. I was motivated to write this article by conversations heard on local radio talk shows, which were about “slave foods” and traditional trade ties with countries responsible for and involved in colonialism and slavery.

Twenty-Fifth Meeting of the Council for Foreign and…

The national dishes of CARICOM Member States include ackee and salt fish in Jamaica, salt fish and bananas in Saint Lucia, oil down (ground provisions and cured meat stew) in Grenada, and so on. The regional dish, by my assessment, is salt fish and bakes (dumplings) found in almost every 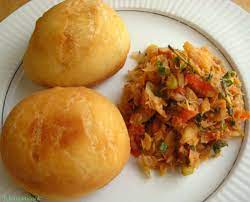 CARICOM country. So, the salted cod fish, herring, and mackerel; corned pork and pig’s tail; and salt beef are very prominent in Caribbean cuisine. Add oxtail, pig trotters, and chicken stew (fricassee), and, at Christmas, a meal is not complete without ham.

The radio conversation included a comment that we were all brought up on “slave foods”, primarily the salted and pickled fishes and meats, and the host remarked that at times he needed a break from the “slave foods”. The impression was given that it was only the enslaved African people who were forced to eat these salted “slave foods”, adding the inferior extremities of animals, such as pig’s tail, oxtail, chicken feet, along with soup (beef) bones.

I thought that this was not entirely factual as, from early civilizations, the means of preserving fish and meats for consumption were primarily salting, pickling, smoking and drying, especially if these foods were to be kept for extended periods. Refrigeration, for preserving foods, as we know it, did not come into common use until the 20th Century. So, the consumption of cured fish and meats, as well as vegetables, was worldwide prior to this. Armies and navies survived on these foods. Curing meats and fish have been a tradition in Britain and Ireland, e.g. corned beef. Bacalao (dried salted cod fish) is widely consumed in Spain and Portugal. Visit an Italian delicatessen and see the range of salted and smoked meats on sale. So, I have no doubt that the preserved foods were being eaten by all who lived in the Caribbean colonies.

The “slave foods” have now been elevated in the export market due to the sizeable Caribbean diaspora in Britain, the USA and Canada. The diaspora’s demand made it possible for ackee to be exported as well as other foods which would have been in the slave provision grounds and on their plates. Caribbean restaurants and television and YouTube programmes, as well as tourism, have popularized the regional cuisine. Imagine discovering that the humble ‘turn-cornmeal’ (cou-cou in Barbados) is the trendy gourmet delight ‘polenta’, and now we are told that collagen, in soup bones making bone broth, has anti-aging properties.

I would say that we should endeavour to make our foods healthier; desalt, trim fat, and, as in all things, eat in moderation. Add locally produced substitutes, where possible. Do not disrespect our food heritage. I will always savour well prepared stew peas.

Well, another radio host thought that we should diversify our trading partners, focusing more on intra-regional trade, but it seemed countries wanted to maintain the colonial and slavery relationships. From this comment, I assumed it was meant our traditional trade partners, Britain, founding European Union (EU) members such as France and the Netherlands, the USA, and Canada. Recall Canada was a colony of Britain up to 1867. Much of the “slave foods” were imported from these countries. They were also export markets for Caribbean agricultural produce. You may refer to my articles on CARICOM’s trade with these countries.

The fact is, that currently, the USA is the region’s principal trading partner in goods and services, second is Britain and the EU combined, and third is Canada. The region has preferential trade agreements with all these countries, which are home to a significant Caribbean diaspora.

The question is, would it be practical to de-emphasize our trade with these traditional partners because they were into colonization and slavery? Does this make sense, or is it said for sensational populist effect? What else would we need to de-emphasize in these relationships?

In my view, as I have pointed out in previous articles, to realize real economic growth, CARICOM countries, as small, open economies, need to diversify production and expand exports, both in goods and services, to old and new markets. All markets are important, especially existing ones, while we seek to build new ones in Latin America and the Caribbean, Africa, and Asia.

We need a more pragmatic approach to foods, international trade and business.

I take this opportunity to wish you all a happy Christmas and I hope that 2022 will be a better year. I am hoping we can ditch COVID-19.

3 urgent goals for sustainable growth, opportunity and jobs in 2022 and beyond