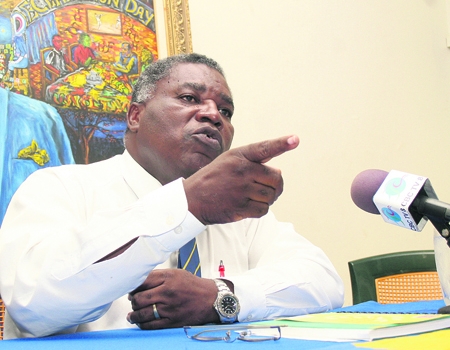 BRIDGETOWN, Barbados, CMC – A senior Barbados diplomat Wednesday called on Caribbean people to secure their future by taking full advantage of the opportunities provided under the CARICOM Single Market and Economy (CSME) that allows for free movement of goods, skills, labour and skills.

“We look forward to the day when freedom to move to learn, to work, to do business, to provide services with full social service security and safety nets, with provision for the full movement of families, will be seen not as a privilege for a few, but a right for all CARICOM citizens,” said the island’s Ambassador to CARICOM, Robert ‘Bobby’ Morris.

Addressing a ceremony for 19 students and one CARICOM Youth Ambassador, who will be going to Jamaica from April 10 to 16 as part of a CSME Student Exchange Programme, Morris reminded the students that Caribbean people have always been travelling to various destinations, whether through forced migration or voluntarily.

The diplomat underscored the importance of the Freedom of Movement régime to the regional integration process, and emphasised that the CARICOM Strategic Plan, 2015-2019, had this régime at its centre in terms of economic development.

“We look forward to the day when surplus human resources from one territory can be employed to add value to surplus land and natural resources in another country for the overall benefit of the region. It is the fervent wish and desire of integrationists that within the shortest possible time span, the identity of being members of a Caribbean civilisation will be on an equal basis with our commitment to our individual nation states.”

Morris told the audience that the Freedom of Movement régime was identified as an important catalyst for the development of regional economies, since it would help to lift them from their current state of economic stagnation.

He noted that if this was to become a reality, then it was imperative to engage the youth in such an exercise, and to offer them work opportunities either as employees or as entrepreneurs.

The Officer-in-Charge of the CSME Unit, Gladys Young, said that under the Revised Treaty of Chaguaramas, the five core régimes were goods and services, transportation, industry, and energy, and these were bolstered by supporting mechanisms such as competition and consumer protection.

She said that it was important for consumers to be given “some sort of redress as it pertains to cross border issues”, noting that it was also imperative to have a robust competition régime and to deal with anti-competitive business practices.

The exchange students were drawn from the Cave Hill Campus of the University of the West Indies (UWI). They will be accompanied on their trip by officials from the Prime Minister’s Office and the University.
Last year, a similar number of students from Antigua and Barbuda visited Barbados.

Revive, restore wetlands, home to 40 per cent of all biodiversity