“ANTIGUA & BARBUDA AND THE CCJ – RENDEZVOUS WITH HISTORY” 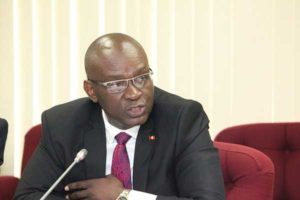 On Sunday November 1, 1981 the nation of Antigua and Barbuda was born as the world’s newest independent state. It had neither been a free nor easy ride. Our independence had indeed been earned and not handed to us on a silver platter.

By then, and back in the 1950s, the poor and oppressed had organised to beat back the dominance of colonial planters. We had also then been an important part of the move to unite the region under the umbrella of the West Indies Federation in 1958.

Following the demise of the Federation in 1962, we also led the launch of CARIFTA in 1965 which would grow into a full-fledged Caribbean Community and Common Market in 1973. And, on June 18th, 1981, we sat alongside our closest neighbours to found the Organisation of Eastern Caribbean States – now globally recognised as a model of regional integration.

In short, our small country, Antigua and Barbuda, has perpetually been at the forefront of efforts to harness the collective skills and resources of the wider Caribbean neighbourhood, not as nations one behind the other, but side by side as equals – as part of a community bound by a common past and with eyes set on a common destiny.

Today, the Caribbean Court of Justice (CCJ) question that confronts us constitutes engagement of yet another significant rendezvous with history. It is not a challenge or responsibility that has landed suddenly at our doorstep. November 6th, 2018 comes to us after decades of engagement of our independence dream. It comes to us as a proposed institutional link to complete the circle of our self-determination.

It was right here, at Deep Bay, between July 4th and 8th 1988, CARICOM leaders who assembled for the Ninth Conference of Heads of Government pledged to pursue the prospects for such a Court. It was a decision the regional community thought long and hard about, before the CCJ first opened its doors in Trinidad in 2005. Suffice it to say, like our independence, it has been no easy road.

We can track the events leading to the specific argument in favour of a regional jurisprudence as far back as the year 1970 when the Council of Legal Education was established alongside a Faculty of Law at the University of the West Indies.

Virtually everywhere then, among the regional legal fraternity, was a concern that development of an indigenous system of justice was a necessary component of the process of independence. That there needed to be an approach to the application of law and justice; an institutional framework that took into account the moral, political, social and economic realities of the space we occupy.

From the Privy Council to the CCJ

In its Appellate Jurisdiction, the CCJ hears appeals as the court of last resort in both civil and criminal matters – a function that currently applies with respect to Antigua and Barbuda in relation to the Judicial Committee of the Privy Council of the United Kingdom.

The Privy Council was established in the United Kingdom in 1833 – the very year legislation was passed to free the slave populations of our countries. It was in fact established to reinforce the besieged circumstances of the monarch of the day – a king (William IV) who had studiously opposed the emancipation campaigns of the day.

Up to now, judicial appeals to the Privy Council remain formally directed to “Her Majesty in Council”.

This is in keeping with its institutional mandate to function as the fountain of all justice throughout the colonial empire. During the colonial era, it was the monarch who exercised final appellate jurisdiction over all colonies and territories. The Privy Council lent expression to this in its capacity as an advisory body to the monarch.

Significantly, such a role toward the end of the 19th Century with the freeing of the slaves and reforms in the process of the plantation economy, focused almost entirely on settling property disputes among the colonists.

Our continued engagement of the Privy Council for many thus remains as a veritable blot on the canvas of our independence, as we continue to carve our way in the world as a sovereign state engaging the world as an integral part of the Caribbean Community.

The CCJ however enters the picture, not as a fleeting manifestation of political or ideological whim, but as the outcome of studied engagement of the issues addressed by states and civil society over many, many years and as a modern and enlightened response to a post-colonial imperative.

There has however been much confusion as to the role and functions of the CCJ. This has led to the situation where, today, just four of the original 12 signatories to the Charter establishing the Court have signed on to its final Appellate Jurisdiction. They are: Barbados, Belize, Dominica and Guyana.

Guyana had long dispensed with the Judicial Committee of the Privy Council, but in the case of the other three, the big step of replacing this colonial stricture was facilitated by a better understanding of some rather complex issues.

Among the most pervasive concern had been the sustainability of the CCJ given the often parlous state of regional economic resources, and any consequential loss of judicial independence that might result from financial shortfalls. Many seemed not to understand that the unique arrangements for financing the operations of the Court are now being cited as an international best practice model.

The establishment of the CCJ Trust Fund, financed at inception by CARICOM Member States, in collaboration with the Caribbean Development Bank, has provided us with a mechanism that virtually guarantees an ability, over the long term, to finance both the recurrent and capital requirements of the Court without periodic recourse to Member States.

This mechanism not only guarantees financial sustainability, but provides an effective shield against the prospect of political and partisan blackmail.

There is also further insulation from political and other influences through the work of an independent Regional Judicial and Legal Services Commission which enjoys the protection of international law and comprises the President of the Court, members nominated by the Commonwealth Caribbean and OECS Bar Associations and others nominated by regional organisations such as the OECS and CARICOM.

There has also been a concern that the proximity of CCJ judges to Caribbean everyday circumstances can render them less than independent in the dispensing of justice. But it is this very closeness to the social, political and economic ethos of the Caribbean that brings to the Court one of its most valuable attributes: an intimate understanding of what makes our societies tick.

After more than 10 years of Caribbean jurisprudence, appeals heard by the CCJ are all recognised as having such a major ingredient. Such an approach is, in fact, a central function of the CCJ – quite unlike the current situation with the Privy Council: distant and as disinterested as it stands.

It took no less a luminary than Lord Phillips, the first ever President of the UK Supreme Court to declare some years ago that in an ideal world, countries of the Commonwealth would have been best served by their own final courts of appeal. At that time, he also bemoaned the fact that appeals from these countries to the Privy Council represented a disproportionate draw on its resources.

Apart from a handful of other countries, most members of the Commonwealth Caribbean, including Antigua and Barbuda, remain among the last surviving countries to cling to this final vestige of the colonial experience.

In the meantime, the CCJ has gone on to become a shining light in global jurisprudence and an accessible, responsive institution when it comes to the cries for justice by our people and their institutions.

For countries that have taken advantage of the Court’s original jurisdiction on matters related to the CSME along with its role as a court of final appeal, the accessibility of the Court has been recognised as being among its finest features.

The use of new technologies to bring live and timely coverage of both proceedings and judgments has complemented the work of the CCJ as an itinerant court capable, when necessary, of moving to the locations from which actions have been filed. It has also provided an avenue for justice on the part of the poor and needy whose cases in the civil jurisdiction now account for up to 15 percent of such cases filed at the CCJ.

The Privy Council is not well known for any of these qualities. Cost, distance and unfamiliarity with Caribbean terrain remain its most disabling and disempowering attributes when it comes to Caribbean people in search of justice.

As a consequence Ambassador Ronald Saunders was moved to remind us recently that in the last 28 years, there have been only 37 appeals to the Privy Council from Antigua and Barbuda – seven of a criminal nature and another 30 civil appeals involving big companies and the government.

By contrast, in the countries that have acceded to the CCJ, there has been growing recourse by those without the power and the influence of the big and the mighty.

There are numerous instances that can be cited in Court decisions to prove that citizens who have a complaint about not being able to access rights under the CARICOM framework, have been able to bring such matters before the Court and to get a fair hearing and have judgment issued.

There is also evidence that with the growing volume of appeals being handled by the Court that the people of the region are increasingly accessing their own court.

Our turn at the crease

As stated earlier, this is Antigua and Barbuda’s turn at the crease. This is our latest and singularly most important rendezvous with history of the modern era.

The nationwide consultations to recommence soon with the population are designed to address the fears, aspirations and expressions of concern by people whose pursuit of justice need not cross the vast Atlantic.

Such proceedings constitute the contributions of all citizens to the required dialogue. It is a conversation that can make the November 6th decision a true reflection of the informed resolve of the people of Antigua and Barbuda to grasp the opportunities of a new phase of the independence project we launched 37 years ago.

Let us join hands and make an informed decision on referendum day. It is not a blue, red, orange or green thing. Put the nation’s interest foremost in making that determination. It is our rendezvous with history.

Bahamas Elections reflect will of the people: Preliminary…