(Press Unit in the Office of the Prime Minister) – St. Kitts and Nevis’ Prime Minister, Dr. the Honourable Timothy Harris continues to draw the international community’s attention to the risks associated with climate change, as well as its inextricable link to increased non-communicable diseases (NCDs), particularly in Small Island Development States (SIDS).

Prime Minister Harris and Executive Director of the Caribbean Public Health Agency (CARPHA), Dr. James Hospedales co-authored an article that has since been published in the November/December issue of the G20 Buenos Aires publication, which is the official conference book for the upcoming G20 Meeting in Argentina, from November 30 to December 1.

In the article, Prime Minister Harris and Dr. Hospedales concluded that, “More must be done to protect small island and low-lying developing states from the escalating dual threats of rising temperatures and unhealthier populations.”

Dr. Harris, who is CARICOM’s lead Head on health matters, and Dr. Hospedales, who is the chair of the Defeat-NCD Partnership governing board, stated in the publication that climate change and NCDs are “two sides of the same coin” and that Small Island Developing States, like St. Kitts and Nevis, “are the most vulnerable to the impact of both climate change and NCDs.”

“One link between climate and NCDs is the excessively large number of deaths among people with NCDs in the weeks and months after a large storm, given the disruption to services and reduced availability of medicines. Another link is food and nutrition security. We are witnessing the erosion of agriculture as more frequent storms, drought episodes and damage to coral reefs undermine food and nutrition security in SIDS. This leads to more consumption of cheap, low-quality imported food, leading to obesity and attendant NCDs,” the article stated.

It went on to state that effective public policies and programmes must be implemented if countries are to turn the tide on the NCD epidemic, such as improving regulatory capacity for tobacco, alcohol, food, and medicines to reduce population risk levels and to increase access to treatment.

The Dr. Harris and Dr. Hospedales co-authored article further noted that both climate change and NCDs are typified by over-consumption of food, fossil fuel, tobacco and alcohol, adding that, “Climate change in the Caribbean means hotter, drier weather, with more category 4 or 5 storms, and inundation by above-average rainfall that leads to loss of life, property, agricultural crops and infrastructure. The social, economic and environmental implications are profound.” 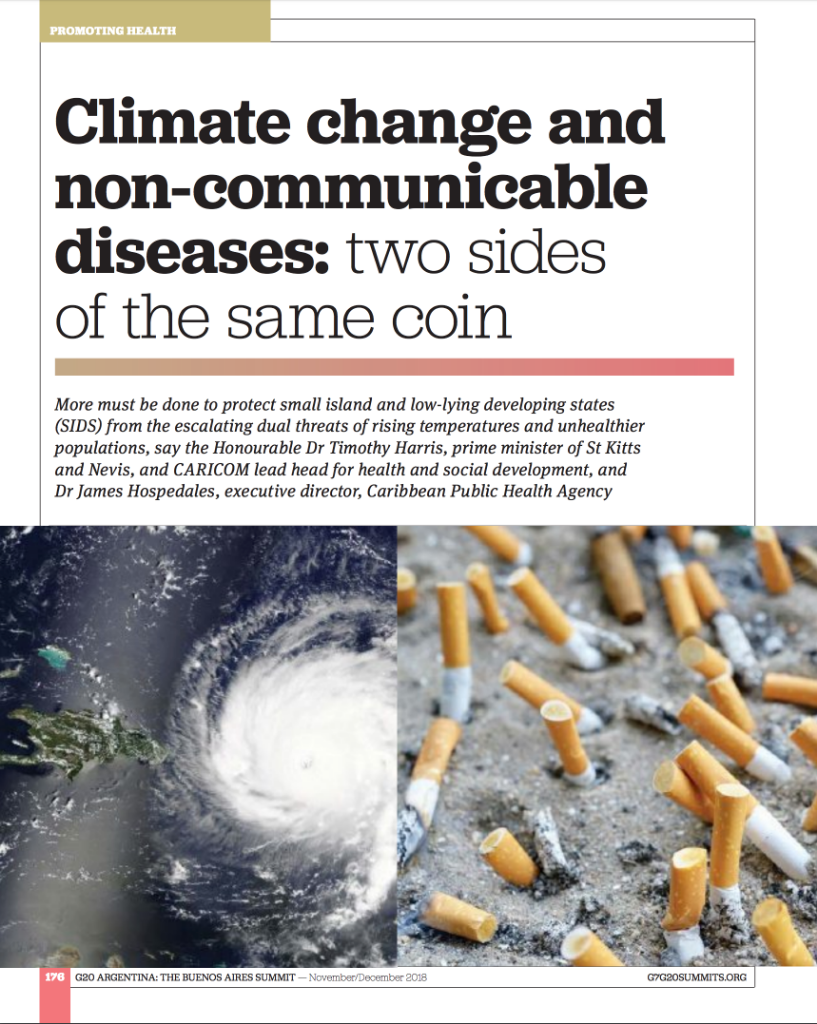 Prime Minister Harris and Dr. Hospedales noted that the urgency of addressing these concerns demands that leaders develop and foster mutually beneficial and demonstrative partnerships without delay.

“There is no luxury of time when lives are at stake; livelihoods are in jeopardy; national competitiveness is under threat; our collective labour force is in crisis, and our SIDS economies become even more fragile under the crushing weight of the formidable challenges of climate change and NCDs,” the article continued.

In September 2018, Prime Minister Harris raised similar concerns when he addressed the 73rd Session of the United Nations (UN) General Assembly in New York City, U.S.A., and during the launch of the Defeat-NCD Partnership, which was held on the margins on the UN General Assembly.

Suriname gives ‘hope and inspiration to the world to save our rainforests’: UN chief