Even though the situation in Haiti is complex and there are a number of views on the way forward, it cannot continue without the intervention of the Caribbean Community (CARICOM) Prime Minister Roosevelt Skerrit stated on Wednesday, 19 February.

He said they agreed to mount a mission led by the CARICOM Secretary-General, Ambassador Irwin LaRocque. Representatives from The Bahamas, Barbados and Jamaica will also comprise the mission.

Caribbean Community leaders are committed to working with…

Prime Minister Skerrit said Heads of Government acknowledged the impact the situation has on countries like Turks and Caicos and The Bahamas.

“We recognise that Haiti is part of the Community and we have a responsibility and a duty and obligation to assist a Member State in unravelling its challenges and to work with (it) towards lasting solutions.” 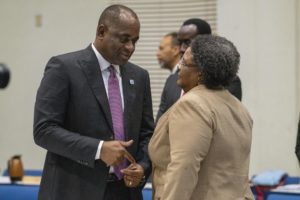 Chairman of CARICOM, Prime Minister Mia Mottley of Barbados anticipates that the mission would have been completed when regional leaders meet for the CARICOM- Mexico Summit in March.

She expressed satisfaction about engagements with Haiti’s Foreign Minister, The Hon. Bocchit Edmond, and noted her conversation with Haiti’s President His Excellency Jovenel Moise earlier Wednesday.

“The first step is for us to have the legitimacy and the integrity of facts that we can rely upon, and that therein after we then work with the relevant players to see how best we can work with Haiti to ensure that they don’t face instability within their boundaries.”

The Chairman also noted that finding a lasting solution to the crisis in Haiti was critical to minimising the fatalities which occur when citizens risk their lives by attempting to cross treacherous seas to get to places like Turks and Caicos and The Bahamas.