US/CARICOM Relations: Temporary Migrant Workers – a longer history than you may think

There has been talk of expanding the Caribbean Basin Initiative to include Trade in Services to get more CARICOM nationals working in the USA on a temporary basis. In fact, CARICOM nationals have been working in the USA as temporary migrant workers for decades, but, although a form of trade in services, these programmes do not fall under the World Trade Organization (WTO) and other trade agreements, but rather, under the International Labour Organization (ILO) and the International Organization for Migration (IOM). These are temporary seasonal workers’ programmes in agriculture (farm workers) and, in more recent times, in other sectors, such as hospitality and construction.

This week, I am indulging in a bit of history which comes from family lores.

Opinion: Caribbean should assess US approach to unilateral…

The movement of people from almost every strata of society between the American Colonies and the British West Indies (BWI) began from the British first entered the Hemisphere and began colonizing territories in the 17th Century. Among others, there was an American Vice President, George M. Dallas (1792-1864), with ancestral links to Jamaica and stories of former Jamaican enslaved people who were settled in Philadelphia in the 1790s. People with links to Haiti settled in Louisiana from the early 19th Century and Bahamians were settling in Florida.

I knew that from the 1860s, in arduousu economic times, BWI people were seeking work throughout the hemisphere, in the Caribbean, Latin America, and the United States despite difficult race relations in that country. The white BWI population, former plantation families, had no difficulty settling generally in the USA. The BWI black and coloured immigrants would go to more liberal cities in the northern states, like Boston and New York. From this continuing migration, remittances became important. My mother had relatives who were part of this migration.

From 1838, BWI people of African descent were emancipated. It would take another 25 years and a fratricidal Civil War for the proclamation ending slavery in the USA to be issued, and it would be two years later, in 1865, that slavery and the Civil War would actually end. It would take another 100 years for black Americans to gain civil rights. [Facing their own challenges], This was a period during which BWI territories were moving towards universal voting rights, self-government and independence.

At the end of the Civil War, there was a shortage of labour in the US agricultural sector as former slaves moved away from the plantations and out of southern states. Industry was also competing for workers. American farmers began privately recruiting farm workers from the BWI, mainly near-shore, from the Bahamas and Jamaica. As they were seasonal workers, it is reported that they became known as “swallow migrants”. Between 1881-1914, large numbers of BWI men, and women, went to work on US farms harvesting fruits and vegetables and cutting sugarcane. It seems pay and working conditions were always issues, cause for protest. For BWI, coming from a different socialization, the rabid racism, particularly in the US south, was somewhat a culture shock.  It seems the British government did have reservations about BWI being deployed in the southern states where race relations were extremely challenging.

Recruitment may have tapered off in the 1920s and 30s. In 1935, however, it seems that the US National Labour Relations Act (the Wagner Act) gave a green light to recruitment of BWI and Mexican agriculture workers.

The US Government Sponsored Programme

With the USA entering the Second World War in December 1941, there was an increased shortage of farm labour as men went into the military services and other workers into war manufacturing. The US Government introduced the British West Indian Temporary Alien Labour Program in 1943. It first applied to Jamaicans and Bahamians, and later to Barbadians [possibly also 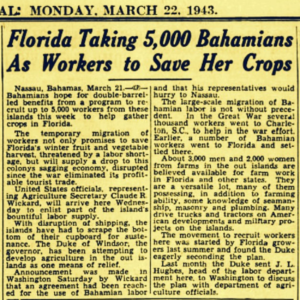 Belize (British Honduras]. My uncle, Luther Morgan from St. Elizabeth, was among the Jamaicans recruited in 1943. He was deployed to Louisiana. From family stories, my uncle found the treatment of blacks abhorrent. In 1945, it is reported that 33, 000 Jamaicans were deployed to 38 of the then 48 states. My uncle, Luther, was again among them. This time he went to Florida. 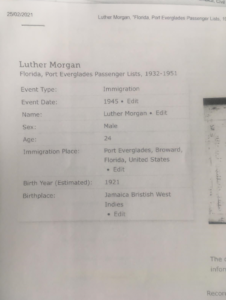 This US government programme was terminated in 1947. Recruitment of BWI farm workers reverted to contractual arrangements between employers and workers. It seems, aided by this programme, the US state with one of the oldest and largest number of BWI migrants is Connecticut.

So, the US farm work programme with Anglo-Caribbean (BWI) countries, and particularly with Jamaica and the Bahamas, is nearly 155 years old.

Will CARICOM countries be able to expand these types of “trade in services” programmes with the USA? It depends on where there is a shortage of labour in the USA, the demand of the private sector, and the political will. It seems, from news reports, there is currently need for medical workers and long distance truck drivers. Of course, these issues are actually more complicated than they seem.

It also seems that there is need for more research into Anglo-Caribbean migration to the USA and its impact on both sides.