Just after the Russian invasion of Ukraine began, the UN Intergovernmental Panel on Climate Change issued its report titled “Climate Change 2022: Impact, Adaptation, vulnerability”. The findings of this report, following the COP26 meeting in Scotland in November 2021, is sending an even more dire warning to the world. The report indicates that ‘to avoid mounting loss of life, biodiversity and infrastructure, urgent, ambitious and accelerated action is required to adapt to climate change, at the same time as making rapid, deep cuts in greenhouse gas emissions’. The UN Secretary General António Guterres on February 28 at the launch of this report stated that “Unchecked carbon pollution is forcing the world’s most vulnerable on a frog march to destruction, now. The facts are undeniable. This abdication of leadership is criminal … Coal and fossil fuels are choking humanity”.

So, with a war in Ukraine, this report on climate change has not received the attention it requires to highlight the apocalyptic crisis facing the world. Along with COVID-19, the world is now facing a third crisis, a dangerous conflict between Russia and Ukraine. It is dangerous not because there are no other wars and refugee crises in the world, but because this particular war involves a seemingly determined leader of a nuclear power and has the potential to be destructive to the whole world, directly and indirectly. We have every reason to be concerned about this particular war in Europe.

At COP26, the world’s leaders failed to agree on the targets to limit temperature increase to 1.5°C by 2030 and for reducing carbon emissions. 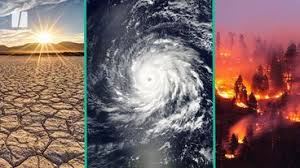 The big producers and consumers of fossil fuels were not enthusiastic about the emission targets. Fossil fuels were too important to their economies both in trade, energy generation and production.

This war in Ukraine has highlighted the continued dependence on fossil fuels and its security risks. Europe is a low producer of fossil fuels, only produced in Norway and the United Kingdom, and a high consumer. Countries of the European Union (EU) are dependent on the importation of strategically important fossil fuels (oil and gas) from Russia. In 2021, two-fifths of gas and more than a quarter of crude oil used in EU countries came from Russia. Russia’s fossil fuels have given it leverage.

Let us not think that this dependence applies only to EU countries. It applies across the globe and with other suppliers.

As countries apply sanctions to Russia, including restricting fossil fuel imports, it is quite evident that dependence on these fuels is a major problem for the world, for those who produce, those who consume only, and those who do both. The Europeans are finding that their dependence has serious national security implications. With this war, fossil fuel prices are rising. This is problematic for consuming countries, such as those in CARICOM, although there are several producers in the region, Trinidad and Tobago, Guyana, Barbados, and Belize. Grenada announced oil finds in 2018, but, in November 2021, the Prime Minister, Keith Mitchell, did not think that foreign investors would be interested in developing their oil deposits.

War in Ukraine is placing a spotlight on the dangers of fossil fuel dependence, especially fuels one does not produce. The UN Climate Change report is showing that the world is on the brink of disaster, if action is not urgently taken to reduce this dependence. Note that climate change, by itself, brings its own national security risks.

The issue is, will countries, including those in CARICOM, now see the light and rapidly move to reduce their dependence on fossil fuels and move to focusing, with a laser, on developing and promoting the use of renewable/sustainable energy sources, solar, wind, geothermal, and even nuclear. They also need to emphasize conservation. Countries have to now decide whether their only habitat, the earth, and their national security should be sacrificed due to dependence on fossil fuels – coal, oil and natural gas.

For me, the answer is quite clear. Is it now clear to world leaders?

Oil settles up but posts weekly decline on recession fears…