The last time I wrote about developments in the relationship between the Organization of African, Caribbean and Pacific States (OACPS) and the European Union (EU) was in November 2021. As Tuesday, April 5, was marked as OACPS Day, I am providing an update on developments in this arena. Recall that the OACPS was established on April 5, 2020, under the revised Georgetown Agreement.

From recent commentary on the Commonwealth, it is clear that, for better understanding, we in the Caribbean need to have more information provided to the public on these international organizations and issues in which Caribbean countries are involved.

International Day of Plant Health, 12 May

The role of the Americas in tackling the global food crisis

CPSO signs MOU with St. Vincent and the Grenadines

The Parliamentarians, in both meetings, covered a range of issues including the signing of the new Post- Cotonou Agreement, COVID-19, and the impact of the conflict between Ukraine and Russia, as well as other conflicts. The OACPS Secretary General, H.E. Mr Georges Chikoti, also used the occasion of these Parliamentary Assemblies to deliver his state of the organization address on March 31. It would have been issued on April 5.

State of the OACPS Address

With his theme, Innovation and Resilience, the Secretary General, in his address, expressed the view that with its stakeholders and other organizations, the OACPS would stand as a champion of solidarity, a promoter of multilateralism, and a trusted, valuable, reliable and visible partner in the international arena.

He felt that the time has come for the OACPS to realize its immense potential while improving resilience in dealing with its own challenges and global issues, bearing in mind that the body operated in a multi-polar, inter-connected world.

In his review of 2021, he highlighted the adoption of the Strategic Plan for the Secretariat covering the period 2022-2025. This Plan will guide the Secretariat’s transformation into a Centre for Excellence and its transition course for the next four years. It fully takes into account the operationalization of the revised Georgetown Agreement, decisions of OACPS Summits and Council of Ministers meetings, and the implementation of the new OACPS-EU Partnership Agreement (Post-Cotonou Agreement).

Its five main strategic objectives are: enhancing intra-OACPS cooperation and collaboration; enhancing and broadening the role and visibility of the OACPS on the international scene;  securing new alliances and strengthening the partnership with the EU; adapting and modernizing the OACPS Secretariat;  and achieving sustainable financing for the Secretariat.

Within this frame, over the next 4 years, the OACPS will focus on: sustainable and inclusive development; governance and peace building; environment and climate change; multilateralism and global governance; and on women and youth affairs as cross-cutting themes.

Secretary General Chikoti noted that this year, the OACPS will be preparing for its 10th Summit of Heads of State and Government in Luanda, Angola, in December 2022. He will be working to fully operationalize the revised 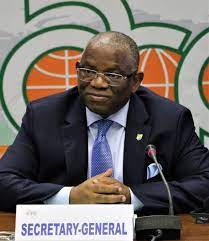 Georgetown Agreement, and, at the Summit, the intent will be reaffirming the OACPS’ ambition to become a dynamic global player in advancing multilateralism, strengthening collaboration with regional organizations, and advancing South-South cooperation.

He also noted that the new OACPS-EU Partnership Agreement is expected to be signed soon.  The Secretariat aims to commence its implementation as soon as possible thereafter. He reminded his audience of Members of Parliaments that this new Agreement promotes the OACPS as an equal political partner of the EU and acknowledges the role which the Organization can play on the international scene. The Secretary General is optimistic that the OACPS and the EU will be able to establish a mechanism or instrument to facilitate cooperation at the international level.

In concluding, Secretary General Chikoti reminded that the OACPS, with its 79 Member States, was stronger together, more innovative and more resilient.  To realize their potential, he did urge the Members to ensure that assessed contributions to the Secretariat are paid on time, and that every effort should be made to improve the political and security situation in some of its Member States and Regions, as stability and security are required to achieve sustainable and inclusive development. SG Chikoti was optimistic for the future and wanted the OACPS to contribute to achieving the UN 2030 Sustainable Development Agenda and the implementation of the Paris Agreement on Climate Change.

Note that Trinidad and Tobago remains chair of the OACPS Caribbean Forum (CARIFORUM) until July, and Jamaica remains coordinator of the OACPS group at the World Trade Organization.

Statement on CAUCUS of CARICOM Heads of Government, Wednesday

Bahamas projected to grow by 8% in 2022 – CARICOM Business

STATEMENT FROM CHAIRMAN OF THE CARIBBEAN COMMUNITY (CARICOM)…