CARICOM: GDP as an indicator of the status of national economies – a false impression

In considering their status, the World Bank using their GDP per capita, classifies 5 CARICOM countries as high income, 8 as upper middle income, and 1 as a least developed country (LDC).

CARICOM countries have been arguing that GDP should not be the only determinant of development status and eligibility for concessionary financing. The size and vulnerability of countries to economic shocks and natural disasters must be considered.

Following from my article last week which looked at the social and economic crises engulfing CARICOM Member States, I decided to look at the issue of Gross Domestic Product (GDP) and the rate of GDP growth, including over time. It is an interesting study confirming the fragility of the CARICOM economies and the serious challenges facing the region’s bid to recover and build back better.

The World Bank lists Antigua and Barbuda, The Bahamas, Barbados, St. Kitts/Nevis and Trinidad and Tobago as high-income countries with per capita GDPs ranging from US$28,608 – $14, 450; upper middle income countries are Belize, Dominica, Grenada, Guyana, Jamaica, Saint Lucia, St. Vincent and the Grenadines, and Suriname with per capita incomes ranging from US$4,436 to US$9, 680; and the Least Developed Country (LDC), Haiti, with US$1,177.

On a regional level, the total population of CARICOM is 18.9 million, the total GDP US$82 billion, and the average per capita income is US$4, 348.

A review of the historical data over several decades shows a very erratic pattern of GDP growth for all the CARICOM countries indicating minimal rates of real GDP growth. For example, the average rate of GDP growth for Jamaica from 1997-2020 is given as 0.10%. Dips in GDP growth have 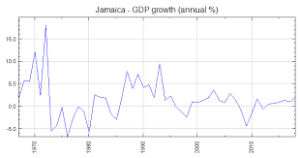 occurred due to natural disasters (e.g. hurricanes, droughts, floods, and earthquakes), decline in exports (commodities), and external economic shocks, such as the 2009 global financial crisis. Countries were still recovering from the 2009 crisis and other upheavals when they were impacted by the health pandemic, the COVID-19 virus, in 2020. With regard to natural disasters, such as increased frequency and intensity of hurricanes, the impact of climate change also must be factored in.

I want you to see, as follows, the level of the 2020 decline in the GDP growth rate for all CARICOM countries, except Guyana which registered positive growth of nearly 44% due to commencing the production and export of petroleum.

As high-income and middle-income countries, several CARICOM countries are being graduated from international concessionary financing. These countries also have very little fiscal space within which to manoeuvre.

The impact of COVID-19 in 2020, as shown above, and its continuing economic impact in 2021, could mean countries accumulating more debt to keep economies afloat.

CARICOM countries have been calling for multilateral financial institutions to use other indicators, such as vulnerability, to determine eligibility for concessionary financing.

The CARICOM Secretary General, Carla Barnett, told a panel at UNCTAD XV in October that with the reality of the region’s vulnerabilities exposed by the Covid and Climate Change crises, the call for a more appropriate basis for determining access to concessional financing takes on greater urgency.  She called for continued advocacy for the further development and acceptance of the Multi-Dimensional Vulnerability Index (MVI).  She pointed out that access to concessional resources for development financing and resilience building remains a significant priority for CARICOM countries and other Small Island Developing States (SIDS).

It is evident that there is a case to be made for reviewing the traditional classification of middle-income status in the face of their long-term poor economic performance, social challenges, and vulnerabilities to natural disasters and external economic shocks.

Indeed, the road to recovery is looking not just long and winding, but full of potholes.