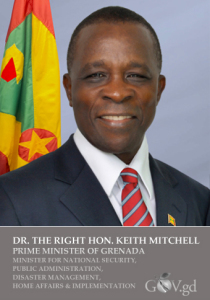 Grenadians vote today in a national referendum on constitutional reform.  Seven Bills have been put before the electorate:

Bill number one: To make the Caribbean Court of Justice the country’s final court of appeal, replacing the UK based Privy Council.

‘No’ vote dominates in Grenada’s…

Bill number two: The setting up of an Electoral Commission to handle all electoral matters

Bill number three:  Ensure the appointment of  a Leader of the Opposition when there are no elected opposition Parliamentarians in the House of Representatives

Bill number four:  Have a Fixed Date for General Elections

Bill number five:   Change the name of the State to “Grenada, Carriacou and Petit Martinique”

In 43 years of independence, Grenada has made its mark as a proud developing nation; many times punching above its weight in academia, business, politics, invention, entertainment, sports, culture and many other spheres of human endeavour.

We have continually fought for the right models to ensure the sustainability and continued advancement of our people.

Each time it looks like we have been knocked down, we have picked ourselves up.

We earned our independence through protests, and emerged stronger from uncertainty.

We have regularly and boldly set the tone in the Caribbean basin; flirted with revolution; and despite being marked with the scars, never losing our yearning for change and betterment.

Today, this proud Grenadian nation is stronger than ever. We are a people marching forward, who have learnt from the past and who now look to the future with expectation.
Truth be told, there have never been more opportunities for our youth. And though many challenges remain, we are confronting them courageously.

Even though at times, in the political sphere, we are hit by hurricanes of negativity, our people — by and large — remain hopeful; always believing in the best of our fellow citizens.

This is the context and the subtext to Thursday’s national referendum.

Since democracy was restored 33 years ago, following the darkest and most painful period in our history, our people have always debated how best to tweak our existing constitution to make it more relevant to the dreams and aspirations of every citizen, but particularly, the least among us.

We have all gone through an arduous period of discussion and debate on constitutional reform – many times passionately — since the days of Herbert Blaize.

Every government since then has invested in that process that has culminated in an intensity of effort in the last three years.
In recent years, a multipartite Constitutional Reform Advisory Committee, that represented trade unions, NGOs, churches, the wider civil society, the business sector and political parties, has fearlessly led the process.

The committee has been chaired by Dr Francis Alexis, an outstanding constitutional lawyer, whose services have been sought around the Commonwealth; a sometimes political adversary of mine, but who respectfully and patriotically accepted this offer to work on behalf of all Grenadians.

All sectors have contributed to this process; and though we have not always seen eye-to-eye on all the issues, we have been united in the belief that our Grenadian commitment could be made stronger through constitution reform.

This process has always been about how we deepen the rights of Grenadians; expand the people’s access to justice; build a stronger platform for greater economic sustainability; develop the process of democracy; strengthen the concept of governance and eliminate opportunities for political excesses.
We would therefore be making a mistake if we all turn our backs on this historic opportunity.

And that is both the beauty and essence of it all – that we can all inch forward together. We can still dance, even when the beat is not our favourite tune.

Former Prime Minister Tillman Thomas was right, when he said two years ago that we must all support the concept of constitutional reform.

In the pre-partisan political era of this process, Mr Thomas rightfully stated, and I quote: I would advise whatever is positive for the nation that we all go along with it; whatever improves the democratic process. I believe an incremental change in the constitution is something we all should go along with.” – Unquote.

My administration would have loved to have put the issue of Public Sector reform central to this current process; but very early on, we were told by the advisors that, perhaps, at this stage in our history, it is a goal too ambitious to be achieved right now.
And as our young people would say, we will “wheel and come again” on this issue.

After an exhausting process, seven bills are presented, on which we can all vote.

That vote takes place in every constituency and in every polling division this Thursday, November 24th.

The party, which I lead, has left it up to every citizen of Grenada to vote their conscience on each of the bills. For us there is no political litmus test; no political agenda, just an unapologetic yearning for the national good.

Some bills have turned out, no doubt, to be more controversial than others; but surely there are several others that should not be tainted by political quarrel.

Bill number one: To make the Caribbean Court of Justice our country’s final court of appeal, just as many islands in the Caribbean are moving to do, is both a practical and desirable matter.

The CCJ affirms our Caribbeanness; it ensures that justice is dispensed through the cultural lens of the region, and makes the highest courts more accessible and affordable to the poorest among us.

A Caribbean region that has given us C L R James, Marcus Garvey, T A Marryshow, Sir Frank Worrell, Walter Rodney, Sir Eric Williams,  Bob Marley,  Sir Arthur Lewis, among others, is surely ready to dispense its own justice.
If we tarry on this matter, we would deny ourselves the applications of the boldness of both Gairy and Bishop’s revolutions of 1951 and 1979 respectfully.

Eric and Maurice — and all those who toiled with them — would not have faltered on this alter of promoted self-doubt and self- hate.

Bill number two: The setting up of an Electoral Commission, guarantees fairness and transparency in our democratic process, and removes future suspicion about the conduct of future elections.

This bill is a practical shout-out to the notion of good governance and transparency.

Surely, no one will disagree with that.

Bill number five : The proposal to change the name of the state, promising to make us a more united nation – is something that many have clamoured for.  We have heard in debates and in song – put we name on the passport. Well Carriacou and Petite Martinique — as we move forward as one people –we have heard you.

These are three of the seven bills that we can all agree on without any political grand-standing, or the evoking of any fear – real or imagined.

Many people have rightfully argued for the others – for bills that strengthen the rights of women; promote more transparency in governance; limit the terms for prime minister and guarantee a voice always for the opposition.

There are some noble ideals in those four other bills, and yes, we have heard the concerns from different groups. The bottom line is that these are all matters on which we should go out and vote our consciences.

Each eligible Grenadian must decide what combination of the seven bills they are comfortable with, and go out on Thursday to vote accordingly.

Just as in a general election, people who work are allowed time-off, without consequence, to go out and exercise their franchise.

Referenda like these do not happen regularly. For my generation, and even the one after me, it might be the first and only opportunity that we get to have a direct say in  amending a document that was handed down to us, even before we had colour television or access to the internet.

The world has changed a lot since 1974; and we continue to change with it.

Even when struck down by hurricane or bitten by political upheaval, our people have never feared the future. And we do not fear it now.

We can make a mark for the next generation of dreamers, who will continue to reach for the stars, because we had settled for solid ground on which they can plant their feet.

As the Prime Minister of Grenada, I personally appeal to all Grenadians to go out and participate in the referendum on Thursday.

If you need further information and guidance, speak to your representatives, or your social and religious leaders.
Whichever direction the vote goes, I am assured of one thing: Grenada will win on Thursday.

I look forward to us waking up on Friday as a greater Nation which is—in the words of our national anthem:

Ever conscious of God,
Being proud of our heritage,

…. with faith and courage

As one people, one family!

Trade in services workshop underway in Antigua and Barbuda