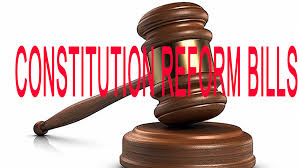 ST. GEORGE’S, Grenada,  CMC – Grenadians Thursday voted overwhelmingly to reject seven pieces of legislation that would have reformed the Constitution the island received when it attained political independence from Britain 42 years ago.

“The people have spoken in a referendum…and I have accepted it…and we have to learn from the process…because it has never been tried before and I think this is what we have to understand,” Prime Minister Dr. Keith Mitchell said.

The main opposition National Democratic Congress (NDC) in a statement said it would hold “an extra ordinary press conference” on Friday.

The referendum had originally been scheduled for October 27, but was postponed for a month to allow for more public education and stakeholder consultation.

But by a vast majority, the voters turned their backs on plans to replace the London-based Privy Council with the Trinidad-based Caribbean Court of Justice as the island’s final court, as well as rejecting term limits for the prime minister and the appointment of a leader of the opposition in Parliament.

In addition, they also rejected moves to change the name of the tri-island state and plans to establish an independent electoral commission.

Prime Minister Mitchell, speaking on television here said he was disappointed at the low voter turnout and that people who were rejoicing at the results were doing so “because they chose to play games with the future of this country”.

Mitchell said that the bill before the voters had nothing to do with him personally and defended also the decision of his administration not to campaign openly for a “Yes” vote.

Mitchell said he was at a lost as to why the bill to establish an Elections and Boundaries Commission was rejected when the present system allows for the government to control the electoral process.

“Right now the present system gives the government all the powers by voting (against it) they have continued a process where the government of the day can have all the interest it wishes to have in the electoral process.

“I believe that this is fundamentally wrong, my children and grandchildren of the country must not be left with this,” he said, asking also what was wrong in including the names of Petite Martinique and Carriacou as part of the tri-island state.

With 98.9 per cent of the preliminary figures released here by the Parliamentary Elections Office the biggest defeat came in the so-called “promotion of gay marriage” bill that Grenadians snubbed by an almost three to one margin.

They rejected the Rights and Freedom Bills by a margin of 5004 in favour as against 16,112 voting “No”, Many Grenadians, including religious bodies said the bill would have encouraged same sex marriages in Grenada.

Grenadians also voted against the CCJ by a margin of 9492 in favour as against 12,434 against.

Prime Minister Mitchell, speaking on television here said he was disappointed at the low voter turnout and that people who were rejoicing at the results were doing so “because they chose to play games with the future of this country”.

He said he regretted the defeat for the CCJ, noting that he should have done more to encourage voters to accept the CCJ as the island deepens its political independence from Britain.

“The one bill that I feel strongly about that maybe I should have gone out more publicly on take a position I feel as a Grenadian, a Caribbean man we are hurting ourselves as a people.

‘It is time for us to enjoy the benefits of the Caribbean Court of Justice and I will not stop advocating this because I think it is fundamental. It is not about NNP (ruling New National Party), NDC. It is about the people of our country,” he said.

Today is International Day for the Elimination of Violence against Women

US$47M for Development Projects under Tenth Cycle of CDB’s…

WIRSPA Welcomes New Directors and Renews Its Commitment to…